Mirrored Insanity was a two-sans fan-made fight theme made by the YouTuber ReveX. It starts out as Dust!Sans roaming in his universe, seeking to kill monsters as usual, but then, Insanity!Sans had arrived at his universe through unknown means, and this results in the fight.

Will one survive? Will one die? Or will both die? 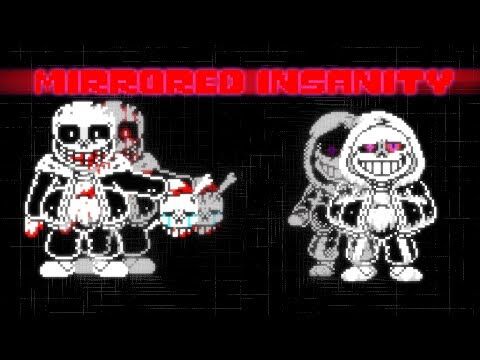 Dust sans is doing what he usually does, Killing everyone to gain the power he needs to kill Chara for good, Suddenly, He walks into Insanity sans, Who has somehow warped into a different universe, But insanity sans has not noticed it because the underground is empty just like it is in his own universe, Dust sans gets confused cause he has never seen this person before, Mainly because it's an alternative version of himself, And of course he looks identical to sans, Which is why he asks "Why do you seem familiar?", And Insanity sans being Insanity sans of course responds with "Why..? Well, Let's just say that...I ' M T H E M A N I A C Y O U S H O U L R U N F R O M =)" and then the first fight starts, Dust sans obviously doesn't know that Insanity sans is, Well, Insane, So he doesn't use all his power against insanity sans, Which ends up being one of his greatest mistakes, Insanity sans ends up killing Dust sans, When Insanity sans does so, He absorbs a small fraction of Dust sans's Determination, And then proceeds to walk away.

After dust sans has killed Insanity sans, He gets confused, Because he didn't gain anything from killing Insanity sans, He then suddenly realizes that Insanity sans is still alive, Insanity sans uses the determination he absorbed from dust sans when he killed him to refuse dying, Insanity sans is now alive again, And the final battle begins, In the end, Both of them hit each other with great power, And they both end up dying, But, Dust sans, Manages to absorb all of Insanity sans's power, And then uses his determination to refuse dying once again, And therefore, He is alive, But insanity sans is dead, Dust sans is victorious, And now has the power to kill Chara for good, And we may not see it in the end of the video, But he succeeds at killing chara for good, Dust sans has finally gotten his happy ending, But even then, The horrors he has experienced still haunts him...

At the beginning we see a text as if someone's talking to us. This is future Sans speaking to you in a future timeline as you've recently caught him doing something strange and thus he gets the feeling of having to explain himself.

Murder!Sans is casually walking around Snowdin, killing everyone like he would in a regular timeline. A glitch occurs which causes Insanity!Sans to arrive in the Dusttale Universe without noticing, until he stumbles upon Murder!Sans. Murder!Sans is on his way to The Ruins after killing the entirety of snowdin but he meets someone who looks strangely similar to himself. This terrifies him a little and thus makes him question what this person is. Insanity!Sans responds with a sinister laugh only to taunt Murder!Sans and then prepare for battle.

Murder!Sans not understanding what Insanity!Sans is, he decides to underestimate him, which ends up being his greatest mistake ever. In the end, Insanity!Sans ends up victorious.

Insanity!Sans's soul slowly reforms his body. Liquid determination leaks out of him. He doesn't have much time, but he does have enough to kill Murder!Sans. The Finale begins. After a long fight, they both use their final blow only to hit each other, which causes them both to die. The last piece of Murder!Sans manages to quickly absorb Insanity!Sans's EXP and Determination, which allows him to resurrect himself once again.

Murder!Sans has ended up fully victorious. He realizes how much he gained from properly killing Insanity!Sans, and thus claims that he's now powerful enough to kill the player and stop their madness. Murder!Sans teleports to The Ruins, waiting for Frisk/Chara. Suddenly, Insanity!Sans's dust starts to glitch out and fade away. We are unaware of what this means at the moment, but we might find out soon…

Dust!Sans has finally killed Insanity!Sans as he sees the pile of dust on the floor, but as he turned back, he turned to the direction of the dust pile again. Sans notices something doesn't feel right, and that his head suddenly hurts. Then, he sees a red SOUL appear before him which definitely Insanity!Sans'. Sans screams, and the screen turns to static. Just as Insanity's SOUL takes a hold of Dust in an attempt to fuse with him, he screams, and the further he screams, the more static the screen gets. Then finally, all turns black, with a flash of red, and creates a new monster, Insanity!Dust Sans (this is now canon)...

Retrieved from "https://undertale-au-fanon.fandom.com/wiki/Mirrored_Insanity?oldid=112843"
Community content is available under CC-BY-SA unless otherwise noted.