"Papyrus no longer believes in you"

Judgement Hall (After The Fight)

"HUMAN. ALLOW ME TO TELL YOU ABOUT SOME VERY COMPLEX FEELINGS. FEELINGS LIKE... LOSING SOMEONE YOU LOVE. LOSING EVERYONE YOU LOVE. BEING ALONE AND SCARED. STANDING INFRONT OF SOMEONE WHO WANTS TO HURT YOU. THESE FEELINGS... THEY MUST BE WHAT YOU'RE FEELING RIGHT NOW "
– Papyrus, talking to Chara/Frisk

Disbelief Papyrus (also known as Genocide Papyrus) is an OC that was created via a rumor about Papyrus, where he is the final boss instead of Sans in the Genocide Route.

Sans stops Papyrus from fighting the protagonist in Snowdin and tries to do it himself but dies.

Papyrus is often shown wearing Sans's jacket, and wielding a bone about as long as he is tall. His right eye glows orange in battle, while he cries at the same time.

Originally, Papyrus was a kind skeleton who saw the best in everyone. Even when he was killed by the human prior, he still thought they could be a better person. However, when Chara/Frisk killed Sans, Papyrus was heartbroken and fell into a depression that only grew worse when they killed other monsters. Papyrus finally realized the harm they brought and would continue to bring to the other monsters and decided to take action. After being hit by the human, his sadness slowly develops into rage because of their murderous intentions and selfishness.

Before the battle engages, Papyrus explains feelings that haunt him during the whole genocide run.

For the music playing in any of the battle phases, here they are, all in one video.

Papyrus's battle becomes quite a bit harder than the one he has in the pacifist route, and he now uses gaster blasters. He still believes Frisk/Chara is a good person in that phase and tries his best not to hurt them. Since Papyrus doesn't dodge, he uses his bone to block attacks. He sometimes uses Sans's attacks, and the bones he attacks you with can be either blue or orange. Halfway through the battle, Papyrus's bone starts breaking because of all the attacks it took. A few more hits will result in the bone breaking in half, which is where the first phase ends.

Papyrus now holds the 2 cracked Bones with each hand, sometimes making the left piece spin. The protagonist's health is restored to maximum capacity, and the Phase begins. This time, Papyrus is too mad to be interacted with, and he now manipulates the box where the protagonist has to dodge attacks. The battle options fall off their positions, only to come back after in 2 pairs, on each side of Papyrus. He can also prevent you from healing.

Before this phase, Papyrus will 'give up' until he realizes that he is the Great Papyrus. He is then able to bring an illusion of Sans and later, a copy of Undyne back from the dead, although not forever.

One fist is in the air, the other is by his side.

Sans and Undyne are fighting alongside him.

The attacks in this phase are mostly average, but some of them are extremely unfair. His stats are 9999 each.

His special attack is both Sans and Papyrus wearing COOL DUDE clothes while playing pong with your SOUL and some bones. Undyne is revived after the special attack.

At the end of the phase, Papyrus realizes that the copies of Sans and Undyne are illusions and apologizes to them.

His battle body is damaged and his arms are by his side.

He uses normal attacks for most of the phase and he can be killed at the end of this phase.

He believes in you again in this phase and tells you that you can still have a good ending by sparing him.

He still believes in you even if you kill him.

He uses abnormal attacks, such as basketballs and race cars. 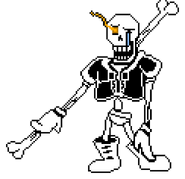 Disbelief Papyrus has been seen in many different varieties in many AUs.

Community content is available under CC-BY-SA unless otherwise noted.
Advertisement