Ink, The Protector of AUs and Imaginations

To travel through Ink puddles

To Create and Motivate

This is a weird question.

Blue eye on the right and yellow star on the left (however, his eyes change color and shape every time he blinks)

Ink Sans is a Sans who exists outside of timelines to help aid artists with the creations of new AUs. Despite aiding creators, he does not create AUs himself. He brings characters to life (outside of already deceased people). Ink is overprotective of the characters he creates and has started fights over them many times.

Ink started out as the only character in an unfinished AU with feelings. To escape the abandoned AU, he ripped apart and destroyed his own soul. This pulled him out of his world, and he was left in the anti-void, without a soul and without memories.

Eventually, the paint of an unnamed artist fell into the anti-void, each color imbuing him with feeling. After some time without color, though, He would revert to his emotionless self. Ink fixed this problem by filling vials with the colors that were splashed on him. It allowed him to pretend to have a soul, so that he could feel.

Gradually, Ink used the ink from creators to create the doodle-sphere, and to create his powers.

He likes making art on canvases. When he gets too excited he will often throw up black ink. He is always happy to visit other AUs. Ink has the strange habit of checking every AU version of Sans' height because he is slightly smaller than the Undertale Sans. But in some fan-comics, Ink is shorter than all of the Sanses but Blueberry. He is often childish though.

Ink is very forgetful and often stops mid-sentence, or writes things down on his scarf to try to remember them. He likes to motivate people and make them laugh, usually by "being a jerk". Ink wants a soul and is shown being embarrassed or sad when the topic of his paint vials comes up during conversations with others.

It has been confirmed by Comyet that, despite popular Fan-made theories, Ink is not Lawful Good. It was stated in a picture that Ink is "Chaotic Neutral, at best."

He also literally cannot care for others without his paint vials, due to lack of having a soul. In the Star Sanses comic, Ink and Dream fight because Ink does not care for the emotions of the people inside the AUs. This argument was ultimately a flop because of Ink's short-term memory, and Dream's inability to feel negative emotions over periods of time (longer than a few seconds).

Ink is often associated with Error Sans and in different AUs. They are either companions or enemies. Some people also ship them, mostly because of that old saying, "opposites attract."

Ink has ink blot on his right cheek. His eyes are usually a blue circle in the right eye socket and a star in the left. He wears UT Sans' jacket hung around his hips, brown, long sleeves with blue lines and a light shirt; a protector is on his shirt, attached to his chest. Ink wears a giant brown scarf which is almost as big as himself. He has a work belt crossing his chest, with rainbow paint vials (which have heart-shaped tops) on it. When Ink drinks what is in the vials, he gets artificial emotions. Ink has pants that have the same color scheme as his sleeves. over the pants, He wears light brown shorts. Instead of slippers, Ink wears sport shoes with tiger prints on the sides. He also has fingerless gloves.

On his back, Ink holds his signature weapon; His paintbrush (which he names it Broomie). Underneath his clothes are swirling tattoos that fall from the top of his neck, down his spine and rib cages until finishing up at the very start of his legs. The tattoos run 1/4 down his arms and are covered by his undershirt.

Ink retains many characteristics from his old appearance, including his eyes, his paint vials, the ink blot on his cheek, his scarf (although it has become slightly larger). He still has Broomie, his paintbrush.

He now has a white long-sleeved undershirt with a small brown jacket over it. His brown pants are actually overalls with the tops tucked into his waist. The legs are very wide at the bottoms, with creases around the legs. He also has no shoes. Instead, he goes barefoot with a pair of leggings.

High Tier Regeneration: Came back even after tearing apart his soul, which erased him from existence.

Bone Manipulation: Should be similar to but likely stronger than Classic Sans.

Teleportation: Capable of teleporting to any timeline or AU through any liquid source mixed with paint.

Immunity to Soul Manipulation: Due to lacking a soul, he can't by controlled.

Broomie: Using his paint-brush, Ink was capable of creating the Doodle Sphere, a structure with 350+ alternate universes that each have a theoretically infinite number of timelines. Its main source is magic paint.

The ability to float/hover: Self-explanatory.

Ink in Underswap version: When Underswap Sans tripped and accidentally splatted the ink all over the place, this caused Ink! Sans to appear. This would be his first time meeting US Sans.

Ink and Dream are the only Sanses who can live in the creative realm (creativity of artists). Dream is the creator of good emotions, while Ink protects the AUs, which are filled with them. Dream works together with Ink and helps him to fight against Error and Nightmare. Dream and Ink have an undying connection that can't be broken.

Jokublog (Dream's creator) has posted a collection of facts relating to the relationship between these two, and has confirmed that they had a fight when Dream realized that Ink didn't really care much about the people in the AUs.

Ink serves as a guide to help Alternate control his power. Nothing is really known about their connection (since Alternate is stuck in a staged scratch game that is controlled by a player). Ink can travel to any place he wants. They only meet when nobody is playing the game.

PaperJam, or PJ, is supposedly Ink! Sans and Error!Sans' "accidental" child. They were created by the leftovers of Error and Ink's battles across the multiverse; blobs of ink and error strings combined together to make PaperJam. Even though a lot of people make Ink alive with Paper Jam. PJ was created by 7GoodAngel.

Palette is the Fanon child of Dream and Ink.

Ink's Paintbrush is named Broomie. It serves as a conduit for Ink's powers. It is extremely light and mobile to Ink, but to anyone else it would seem unbearably heavy. He can create anything with his paintbrush as long as he still has paint in his vials.

Alpha!Sans is somewhat of a mentor figure that stirs Ink in the correct path when needed. Ink and His relationship doesn't go any further than this. 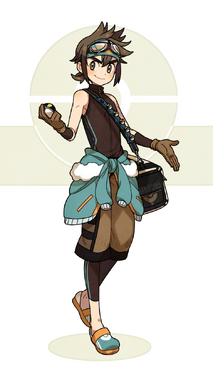 The original art by CookieHana that inspired Ink's original design 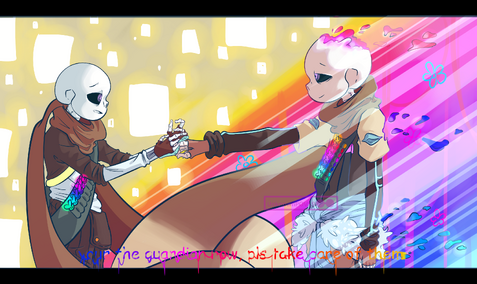 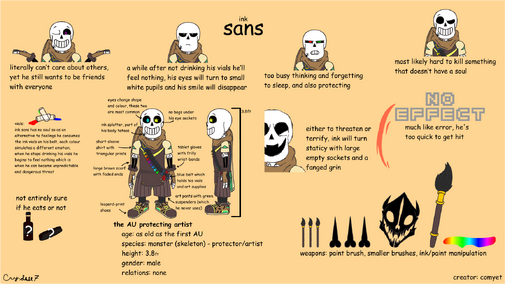 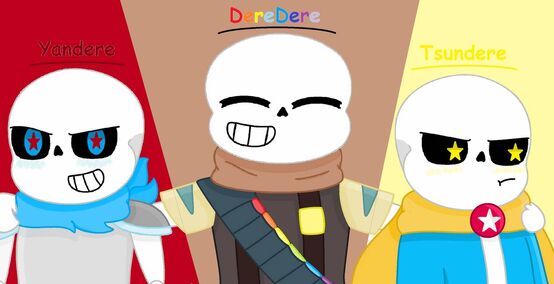 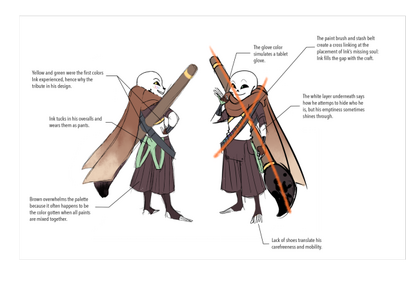 Retrieved from "https://undertale-au-fanon.fandom.com/wiki/Sans/Inktale?oldid=110293"
Community content is available under CC-BY-SA unless otherwise noted.