beer and the color blue

"This will be the last time you hurt my brother."
– LVtale Sans

LV!Tale Sans started off as a regular Undertale Sans. But, there was a virus, which infected Sans and much of the Underground. Unlike everybody else, however, the virus did not have full effect on Sans.

LV!Sans has a red hoodie and a white hood, with a grey zipper.

Like Killer Sans, LV!Tale Sans has black liquid coming out of his eyes. He has black shorts with grey stripes and a white shirt. LV!Sans also has white slippers and holes in his hands.

He has the personality of a regular Sans, but he gets very mad if anything from the past is brought up. He is also more scary/intimidating then the regular Sans.

in combat LVtale sans is unpredictable. he is very fast in his combat. he will try to kill the Person who will pose the biggest threat first.

LV!Tale Sans can create, shape and manipulate fire, the rapid oxidation of a material in the exothermic chemical process of combustion, releasing heat, light, and various reaction products, flame being the visible portion of the fire. Depending on the substances alight, and any impurities outside, the color of the flame and the fire's intensity will be different.

The Gaster Blasters are mainly used to attack enemies by releasing a blast of red energy. It can be used as a shield to block attacks, and can even block other blasts from Gaster Blasters. the SOUL he has Change what the blasters do.

These have orange eyes and fire orange beams. They do damage to you unless you move while in the beam.

These have yellow eyes and fire yellow beams. The more sins you have committed, the more damage these do.

These have green eyes and fire green beams. Like Justice, they will heal you if you are a good person, or do nothing if you have done bad things (EX: Rudeness, jealousy, etc.)

There are more, but sadly unknown

Every LV!Tale monster can heal themselves or others.

LV!Tale sans is a very good strategist and can think his way out of many different situations.

LV!Tale Sans can create a "short-cut" to 2 different places and teleport there.

Put Killer and Dust Sans's bones together and you get this. 5x stronger in Bad Time mode, and he can change their color after they have been summoned.

Every time you try to hit LV!Tale Sans, he will dodge, getting higher ATK. He can also restrict RESETs and LOADs. LV!Tale Sans can also break the FIGHT button, box, and can restrain magic.

Like Epic!Sans, LV!Tale Sans can use the holes in his hand to absorb energy and shoot it back out.

LV!Tale Sans can turn your SOUL blue, fling it around, and pretty much do what a normal Sans does to your SOUL.

LV!Tale Sans can summon black tentacles, the idea most likely from Nightmare!Sans.

He's a Master with all close-range weapons(Axes,swords,knives,Cleavers,Etc)

LV!Tale Sans can take LV, but not from others stronger then him.

he can summon money.

These are slightly more powerful than Error Sans's strings. Every time LV!Tale Sans uses these he loses 1 LV, so he tries not to use these.

LV!tale sans is excessively resistant to any kind of virus.

LV!Tale Sans can collect code from other AUs. (Mostly stats for LV.)

He can of summon a portal to a dimension no one can access except for himself. LV Sans has made it sure that nobody will ever find out about this

he can summon his Henchmen to help in a fight they get a x2 boost by this.

this only Works with his Weapon.

LV!Tale Sans can only use this when the virus takes full control. Hot chains come from the ground and hold the victim down. Then, when they're stuck, he restrains all magic usage so they can't teleport away, and drains half of the victims blood. Then, he waits until the victim gets their blood back and does it all again until LV!Tale Sans gets bored.

LV!Tale Sans can summon an axe.

LV!Tale Sans can only this in his LV!Fell form. It is almost powerful enough to kill Infected Sans.

LV!Tale Sans can only this in full virus form, able to kill Infected.

The virus can sometimes take full control of LV!Tale Sans's body. When the virus is done, LV!Tale Sans will get his body back in a pained state.

He basically becomes error sans. his Strings don't take any LV any more. his blasters become glitched same with his bones And they get stronger too.

LV!Tale Sans can fuse with Fell!Sans to make them 20 times stronger. This can also be used with Virus Control for 50 times stronger and 15 times more violent.

LV!Tale sans will fuse with killer to make them 40 times stronger. This can also be used with Virus Control for 80 times stronger and 29 times more violent.(There will be a Fusion of all of his allies)

LV!Tale sans will fuse with dust to make them 50 times stronger. This can also be used with Virus Control for 100 times stronger and 27 times more violent

LV!Tale sans will fuse with horror to make them 34 times stronger. This can also be used with Virus Control for 68 times stronger and 30 times more violent

LV!Tale sans will fuse with glitchtale sans to make them 41 times stronger. This can also be used with Virus Control for 82 times stronger and 11 times more violent.

LV!Tale Sans tends to hide his anger and he will have a hard time trusting people.

LV!Tale Sans likes chocolate, and may get tempted enough to make himself vulnerable for a bit while he's getting the chocolate.

He has very bad eyesight in one eye.

LV!Tale Sans has phobias of:

LV!Tale Sans was roaming the AUs when he found Unknown Patch and tried to kill them. But, they just shook off the damage.

He helps the murder time Trio if the Player tries to hack the game. He replaces killer when you kill him

Same with Dust Sans, he helps the murder time Trio if the Player tries to hack the game.

Same with dust sans, he helps the murder time Trio if the Player tries to hack the game

Nightmare Tried to get him on his team, but LV attacked nightmare and when he realized nightmare was unable to be killed because of the Ooze surrounding him. he tried to teleport away but nightmare grabbed him and knock him out. he woke up he broke out of the jail and when he got out of the castle he teleported away. After fighting for years They eventually made something so they don't have to fight anymore. LV Would join the bad sanses If the bad sanses would come help him whenever he's in danger

He finds the Trojan strange, but gets along with him. Sometimes the Trojan even helps him.

the only 2( Apart from his brother) that can calm him down when he gets taken over by the virus.

he was in a fight with Nightmare, when suddenly he got teleported into a rainbow void. He looked around and couldn't see anyone so he just sat there and well slept. Then a weird skeleton teleported behind him he woke up and Summoned his gaster blaster Pointing it at him. but he Noticed he wasn't attacking him so he figured if he attacked me I could probably survive the attack Since I have enough defense and a hp to survive. so they Started talking And well they became friends

He hates dream because he is friends with blueberry and tries to stop him when he's killing people.

During one day while LV was chilling outside of his au to making sure nothing happens to it. he got knocked by a mysterious projectile coming from an unknown entity. therefore he was been thrown into a random universe, When he woke up you can he was very pissed off, he Destroyed a few mountains then he Look over to the Side to see 5 people(Technoblade, dream, George, sapnap and Tommyinit),Techno blade screamed "Blood for the blood God" *add epic Battle*(tommy Died 2 times, dream 0 times, techno 0 times, George 2 times, sapnap 1 time) They finally knocked him out And put weakness on him so when he wakes up he he won't attack Them. He woke up after a few hours and Tried to kill everybody in the room (all of dream smp) but his Magic wasn't working.

he tried the run but technoblade and dream held him down *A few hours later of Talking* he became really good friends with everybody he open a portal to his Universe saying goodbye to everybody and everybody Said bye back.

*this information has been deleted by an unknown entity it send you this message:*

through quad!dust!sans sabor found that LV might be a threat to his plan so ever since then they fight......alot

to get the Virus out of him but he Thinks it's already too late so he kills for fun.

this was made by Pxel0ndy 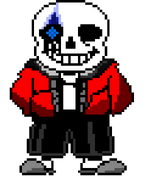 was made by Urmomsnanwas
Add a photo to this gallery

Retrieved from "https://undertale-au-fanon.fandom.com/wiki/Sans/LVtale?oldid=118938"
Community content is available under CC-BY-SA unless otherwise noted.