Angel of Death
Goth of Death

Sans is the god of death along with Reapertale Papyrus

Sans was okay with what he had. Reaping sinful souls had been what he'd done for the past centuries, and he didn't enjoy it, but he could manage it. Unfortunately, after he had accidentally killed the person he loved, he went crazy and suicidal, with bits of his soul lost. Toriel helped him, getting back his sanity.

However, his soul is still not complete, and he is still partially insane. He is back to normal, for the most part. He still can become uncontrollable and temporarily crazy sometimes, though.

Sans doesn't like his job, but tries his best to hide it. He is calm most of the time and hides his feelings. He can be nice and funny once you get to know him. He has a fear of dolls and clowns. Reaper is very scared of Gaster.

Sans is a skeleton with a black hooded robe. He has wings that appear and disappear at his will. He also uses a scythe as a weapon.

Likely Omnipresent: Exists as the conceptual manifestation of death itself, meaning he is everywhere that death exists, he and Papyrus were also directly stated by Gaster to be everywhere, although it may have been metaphorical more than literal.

Immortality: Does not age and can likely reincarnate or resurrect even if killed. 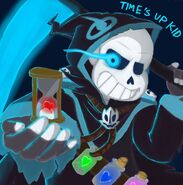 Reapers proifile
Add a photo to this gallery
Retrieved from "https://undertale-au-fanon.fandom.com/wiki/Sans/Reapertale?oldid=93255"
Community content is available under CC-BY-SA unless otherwise noted.