This article is a stub. You can help Undertale AU Fanon Wiki by expanding it.

Sunny is the fusion of Sans and Flowey and is a Neutral Fusion.

They are a character from Fusiontale.

Not much is known at the moment, but it is confirmed that Sans was stabbed by a kid and made a deal with Flowey.

In their first form, They have light green bones (while their hands are possibly covered with dark green gloves. They wear some aqua green [bandage?] leggings with blue slippers. They also wear an blue/aqua green robe that has long sleeves and has teal fluff on the rims of the neck, sleeves and the bottom of the dress. They also have yellow hair with a blue hat wit h some blue/light blue and yellow/orange flowers with some leaves on it. This make them look somewhat girly.They also have some green/blue face paint and have a white heart on their forehead. Their yellow eyes hare shaped like flowers. They also have a green tongue.

They know of their purpose and are quite powerful. They are a trickster, often creating pranks or cracking a joke. However, they are much lazier than Sans.

You can easily get on their good side. Just Don't get them mad or else any Good Times you could've had would be thrown out the window.

They can control time and space.

Uranus is the fusion of Papyrus and Undyne. Not much is known about their relationship at this point. 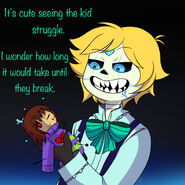 Toying with Emotions by Lappystel 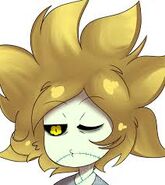 Morning hair by Lappystel
Add a photo to this gallery
Retrieved from "https://undertale-au-fanon.fandom.com/wiki/Sunny/Fusiontale?oldid=113077"
Community content is available under CC-BY-SA unless otherwise noted.